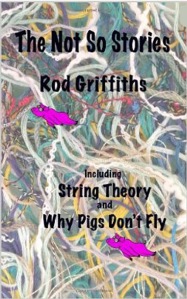 Prof Rod Griffiths has always admired Kipling’s Just So Stories. Kipling was expansive in his style and enjoyed playing with words. For example, we are told that the Whale:

Rod continues, ‘It is charming and quirky but hardly punchy. My stories are shorter. They have been developed in performances at story-telling gigs where time and word counts are limited. I aim to be at least mildly funny because in live performances laughter works so much better than tears.

‘Some of the charm of Kipling’s stories is in his use of simple questions: How did the tiger get his stripes? How did the camel get his hump? Kipling did not exhaust all such questions, so I thought it might be fun to explore a few more, like “Why do swallows sit on phone wires?” and “Why pigs don’t fly”. I have tried to imagine explanations that are vaguely plausible, though clearly impossible. None of these stories are true, or at least not completely true, hence they are Not So Stories.

‘In another departure from Kipling, I have to say that these are not children’s stories, though they are not about what is commonly called adult material; they are simply a little more complicated or in some cases require some background knowledge before the reader is likely to get the point. In some cases the logic may appear a little twisted or even quirky.

‘There are other stories, some of which have a common theme; “String Theory” three stories, “Zombies” four stories and “Gordis Thriff” five Stories. A little more background to these is included at the start of each of those sections. Two of the String Theory stories also fit the “Why Do…” format, but are included in the String Theory section.’

To purchase your paperback copy of Not So Stories from Amazon, priced at £6.00 click here