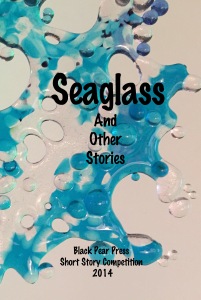 Taking its title from the winning story ‘Seaglass’ by
Rebecca Burns, and consisting of twenty varied and marvellous short stories, this book is the perfect gift throughout the year. Get your copy direct from Black Pear Press via PayPal:

An eBook version is also available

Here’s some information about our winning writers:

Rebecca Burns is a writer of short stories. Her debut collection, ‘Catching the Barramundi’ was published by Odyssey Books in 2012 and longlisted for the Edge Hill Short Story Award in 2013. Rebecca was nominated for a Pushcart Prize in 2011; winner of Fowey Festival of Words and Music Short Story Prize in 2013. Profiled as a writer on the Grassroutes Project, an Arts Council-funded project overseen by the University of Leicester, which showcases the best transcultural writers in the county. Read more of her work at www.rebecca-burns.co.uk

Pam is a writer of flash fiction and short stories, based in the North East of England. One of her stories, Seven Breaths, was included in the 2014 National Flash Fiction Day Anthology ‘Eating My Words’. Other writing can be found online in the third ipamphlet from PaperSwans, as well as on Paragraph Planet, among others. pamjplumb.wordpress.com